The Cape of Good Hope Nature Reserve is one of our favourite areas for some reasonably easy but very rewarding hiking. The views down the False Bay side of the coast are quite extra-ordinary and the Atlantic Coast has some beautiful beach and the special interest of the Shipwreck Trail. Our regular, shorter, easier, circular routes are on the Atlantic Coast, with the slightly more strenuous options being on the False Bay coast.

A spate of recent fires in the greater Table Mountain National Park did not leave this area untouched, with a freak lightening strike igniting a fire along the Atlantic Coast, just at a time when the Silvermine fires were being brought under control. For the short term, this means that most of our Atlantic side trails are closed. 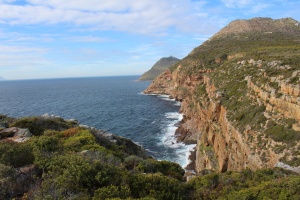 With this in mind we have been exploring the options on the more spectacular False Bay coast. The best known and most used of these is the linear route from the gate of the Reserve, near Smitswinkel Bay, to the Rooikrans view point – a distance of abut 13km. This forms part of the Cape Point Trail, but when done as a day hike, requires the transport logistics of a car at each end. Our best option is a circular a circular route that starts at the Buffelsfontein visitors centre and follows the same  route to Rooikrans, before turning around and dropping down to the coast for the return trip. Here there are three options:

A fourth alternative is to walk from the visitors centre up to Kanonkop and then back to Booi se Skerm before joining the short cut path back. This is also about three to four hours. Times can be delayed by the temptation to stop regularly to take photos and to enjoy the spectacular scenery. The photographs tell the story.